The forty hectares of Dàgala Borromeo, stretching out at about 90 metres above sea level on the meandering hills of the Trapani countryside, have their base in an extremely deep sandy-loam terroir—ideal for the plants to fully develop their root systems. The estate lies about 15 kilometres from the coast, a location that, like Pianoro Cuddìa, assures its vineyards of Inzolia and Nero d’Avola a dry, well-ventilated microclimate which stands out for its marked difference in temperature between day and night. The two labels of Chiaramonte, white and red, are both products of this—both being single varietal wines. Dàgala Borromeo is a symbol of ‘Sicilian-ness’. Within the range of a few hundred metres it contains all the rich biodiversity of the island’s viticulture. It is the kingdom of the native varieties where, according to the different conditions to which they are exposed, vines of the same variety can express different nuances. As there is not a single interpretative frame of reference, it has been people, who with their precision have followed nature’s rhythms, thereby managing to create from one divided parcel of land many different interpretations.

Dàgala Borromeo is one of Firriato’s most important estates. It is a treasure trove for the native varieties of Nero d’Avola and Inzolia, which are grown using the antique method of goblet vine training. It is a magnificent, untouched location. Watching the array of green foliage appear in its vineyards as nature comes into bloom, after the dormant winter period, tells the story of a farming tradition of vine cultivation that has made Trapani the most densely vine-planted province in all of Italy—a tradition the Di Gaetano family have been able to shine new light on. 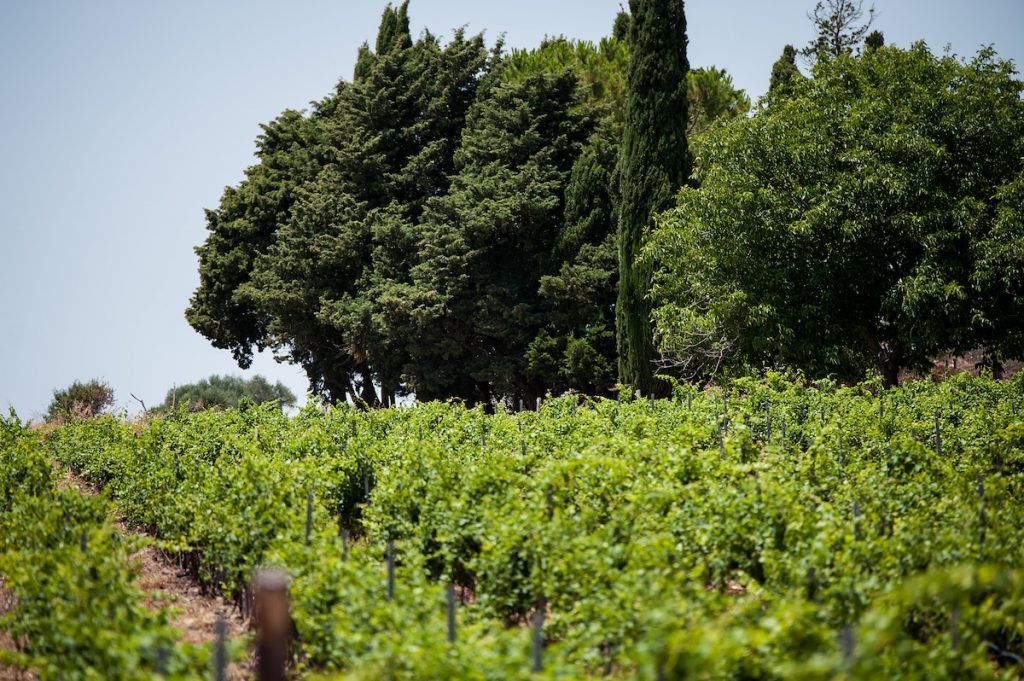 The estate’s soils are of a sandy-loamy, alluvial nature and are very deep. They are young, extremely fertile soils which allow the plants to fully develop their root systems. The richness of the loose soil skeleton also favours the vegetative development of the plants in the vineyard, creating the perfect conditions for a higher plant yield giving rich, fleshy grapes. The grapes reach full maturity in their perfect environment; one characterised by a marked range of temperature between day and night which favours the accumulation of polyphenols and the development of their much-prized aromatic components. The combination of the microclimate conditions found in the area, and the different exposures of the vine rows, even within the same grape variety, however demands close attention and a constant watchful eye. This precise form of viticulture is what allows the Di Gaetano family to give wine-lovers the authentic scent of Sicily. 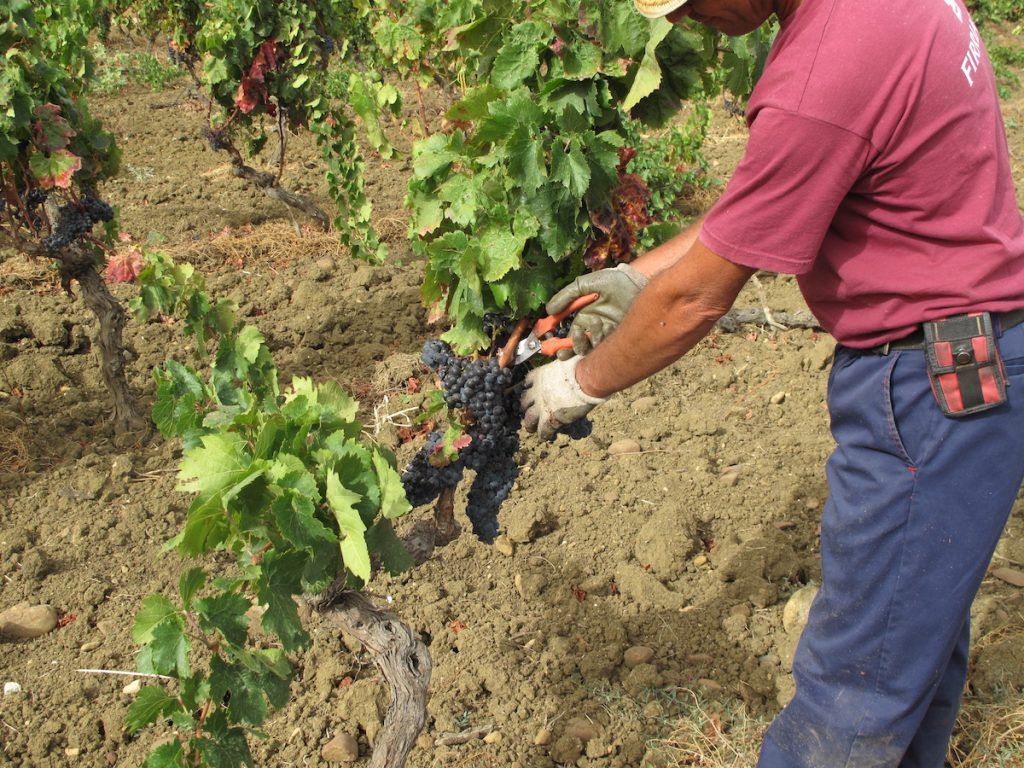 Nero d’Avola and Inzolia are grape varieties that normally mature during the first half of September. At Dàgala Borromeo though, this period could occur either 10 days earlier or later. In this flat area of land the climate is the key player. The seasons’ weather trends, followed by the autumn and winter rainfalls (that sometimes continue well into the spring), and the moderate increase in temperature during the hotter months, dictate the plants’ lifecycle—from the appearance of the first buds until the ripening of the grapes. The comparison of data on rainfall, solar radiation, and temperature (minimums and maximums), recorded throughout the year are the starting point for Firriato’s technical staff in creating a provisional calendar for the harvest—one which always requires a field test. At Dàgala Borromeo’s vineyards, monitoring of grape samples, both visually and through their taste is carried out before harvest commences along the vine rows. The harvest is concentrated into just a few days. This is so that the optimum ripening state of the grapes of each variety is not compromised. 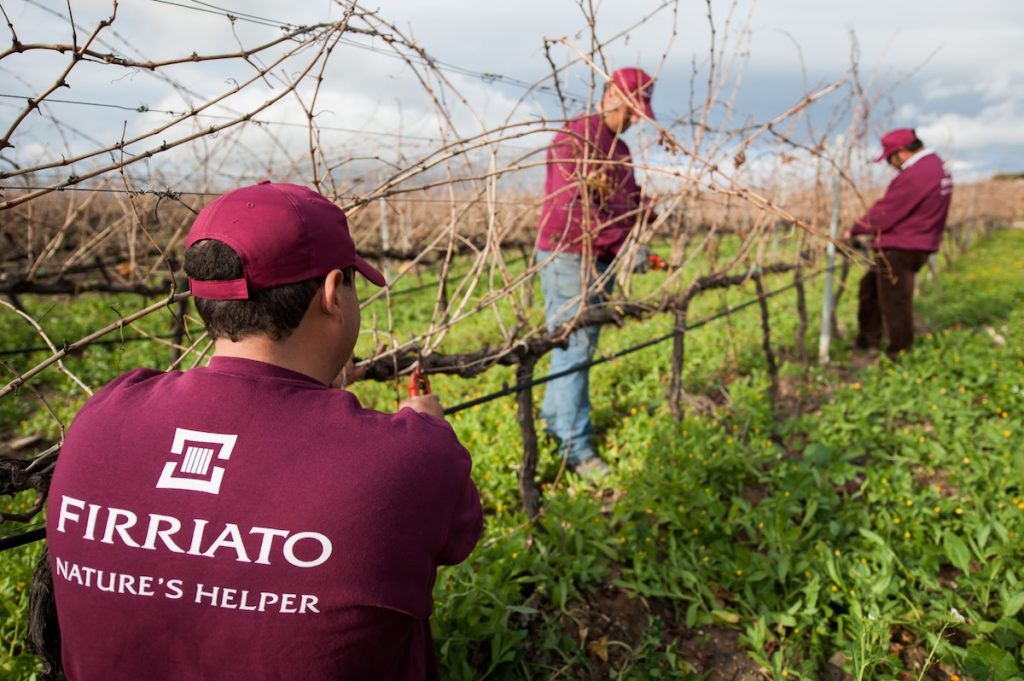 At Dàgala Borromeo the vine training system used is the Marsalese goblet. This is a very old method of cultivation that was once common across the Trapani countryside in all areas where temperature is a limiting factor for vegetative-fruit production development in the vineyard. This training develops and follows a two-dimensional plant shape, with horizontal shoots supported by a wire, from which the vine hangs. This system allows the grapes to hang low to the ground and take advantage of the heat reflected by the earth during the night allowing them to ripen without excessive changes in temperature. Such a system requires sustained intervention on the plant, from pruning of the trunk during its dormant phase to prepare for the sprouting of new shoots, to the removal of leaves around the grape cluster to allow better airflow and greater solar radiation. This system of leaf management, especially on the flatter ground, helps to avert two different risks: excessive humidity, and high temperatures in the vineyard. The first could trigger the risk of disease and funguses. The second, especially during grape-cluster development phase, could stunt their maturation. Therefore ‘mazzonatura’ is used, an age-old farming technique which involves knotting the vine around its support system. It is an agronomic activity that Firriato has been able to reinterpret in search of excellence and distinction.

The estate is characterised by both undulating and flat land and the vineyards enjoy a dry, well-ventilated microclimate which is marked by a heightened difference in temperature between day and night. The element at the foundation of Dàgala Borromeo is its unique terroir. This gives the wines produced in this area a structural complexity. Land which is adequately managed using focussed farming operations, like wild ground cover— a process consisting of regularly cutting the grass which naturally grows in the vineyard— allows the cultivation of quality grapes and combats soil erosion.

Alternating sedimentary layers and a very high variability in the land.
Close

Young soils with the presence of foreign masses from detrital erosion. Its fundamental characteristic is its depth, which can reach up to more than one meter and its naturally clayey-loamy composition. It therefore follows that agronomic management is difficult and requires the use of specific techniques and a precise timing of operations for each location. From a viticulture point of view, Dàgala Borromeo’s soil prompts a high vegetative potential in the plants, with a clear drop off in fruit production. Only by means of the right technical choices in the management of the vineyard is it possible to obtain yields of excellent quality. The correct delivery of water necessary for sustaining the right levels of photosynthetic activity proves to be fundamental when taking the heightened levels of clay in the soil into consideration.

Dagala Borromeo - Nature and the Landscape

At Dàgala Borromeo the light of the winter sun diffuses in evanescent hues. The humid air creates a protective screen, guarding the vineyard like it is a natural treasure trove. Everything seems distant, silent, still. You must wait for spring to discover that you are in an area of Sicily that is both precious and unspoilt. Urban civilisation is far, far away from Dàgala Borromeo, not a house can be seen; there is nothing to interrupt the view that stretches out before you. The bright green of the vineyard integrates harmoniously with the colour of the earth—earth which man alone knows how to guard with ancient manual skill that supports and sustains the vineyard with attentive and considerate care. In a location as unique as this you are overcome by the sudden desire to respect Mother Earth, walking slowly to avoid trampling a wild flower or a thriving grass plant, and falling silent to listen to the voice of nature—beautiful and sublime.
Close