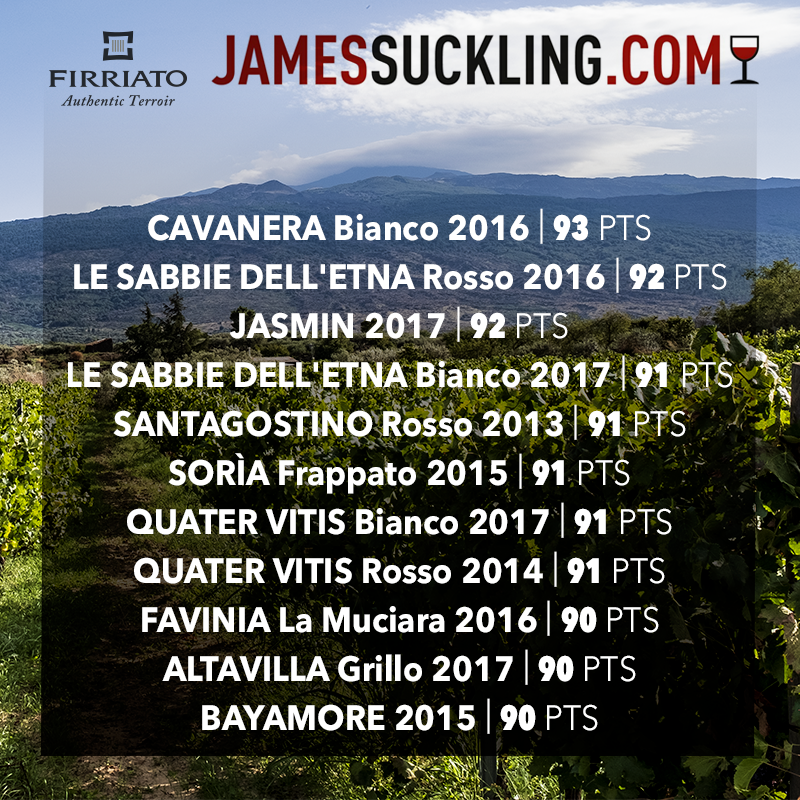 Embrace the wine holiday shopping with confidence through the extensive Firriato collection! James Suckling, one of the most authoritative enological critics in the world, has once again awarded Firriato Vineyards with ratings exceeding 90 points. These outstanding scores are an important affirmation and further attestation of the quality of the work performed by the Di Gaetano family in its quest to unveil the enological complexity of Sicily, as practiced with precision in three diverse Sicilian territories:  the Agro-Trapanese region, the Etna region, and the Favignana Island region.

The extraordinary performance for these wines hailing from the Etna region, with 93 points awarded to the Cavanera Ripa di Scorciavacca 2016, 92 points to the Sabbbie dell’Etna Rosso 2016 and 91 points to the Sabbie dell’Etna Bianco 2017, exemplifies Firriato’s production style known as “Authentic Terroir,” in which every single production step is carried out with care and passion, both in the vineyard and in the cellar.  Attention to detail has given life to these modern wines, unveiling the richness and elegant complexity distinctive of this terroir.

Scores for the other varietals were also excellent:  92 points for the Jasmin 2017, with 91 points awarded to the Santagostino Rosso 2013, the Sorìa Frappato 2015, the Quater Vitis Bianco 2017 and the Quater Vitis Rosso 2014, all produced on the Agro-Trapanese estate.  The Bayamore 2015 and the Altavilla Grillo 2017, each achieved a score of 90 points, as did the Favinia La Muciara 2016, which is a product of the marine viticulture practiced by Firriato on the island of Favignana, the only vineyard in production in the Egadi archipelago.

According to Forbes Magazine, James Suckling is a major critic of, and a main point of reference for the world of food and wine.  After beginning his career as a journalist reporting on crime, Suckling was, for nearly 30 years, editor-in-chief and head European editor of the Wine Spectator magazine.  Following this, Suckling launched the JamesSuckling.com website in 2010, driven by the need to offer the public a more modern approach to the world of wine.  James Suckling’s opinions attract the interest and respect of many wine lovers, producers, and important collectors, and his judgments lend particular weight to the evaluation of wines from around the world.

“In our six estates,” explains Federico Lombardo di Monte Iato, COO Firriato, “we have tried to reproduce in a single mosaic all the enological grandeur of Sicily.  Our commitment aims at enhancing the quality of wines produced from each variety planted, especially of the indigenous ones, within the context of the environment from which they come to life. Through this constant daily work we aim to become more acquainted with the complex biodiversity of Sicily, which is a natural heritage having few equals in the world. These wine ratings are further confirmation of the validity of our entire production project.”